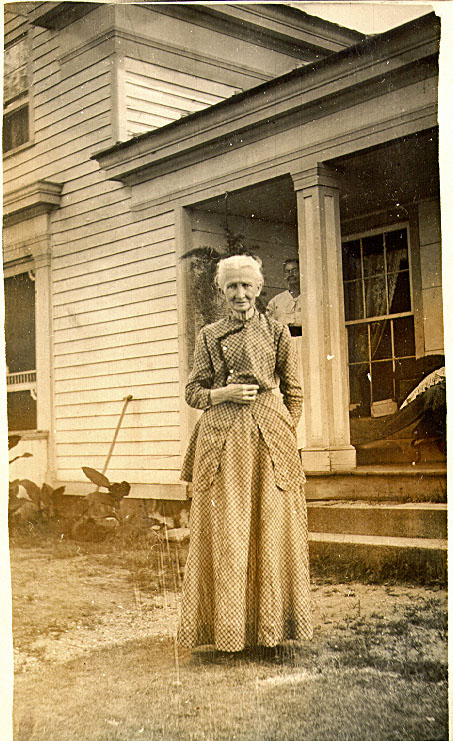 Esther Jenks was born in Southfield, Oakland County, Michigan on 24 October 1832, to Morris and Almira Botsford Jenks.    From The Reunion Papers of the Jenks Family by Eva Seymour Jenks: “Esther Jenks, grew in the homestead in the woods to girlhood, of handsome face and figure, sweet disposition, and a pronounced character marked by industry, thrift, and uprightness. At about the age of 17, she went to Detroit and, staying with her Aunt Mary Botsford Cook, she attended the old Cass School for two or three terms. At the close of her school days – often interrupted by the general community conditions common to pioneers, she emerged a young woman of rare intelligence.”

Great Great Grandmother Lee married Charles Norton Lee on 25 December 1855 in her father’s home in Southfield.  It is this same home which she and GG Grandfather Lee would later own and is the home in which she is standing in the above photograph taken in 1916.  The children of Charles and Esther included Emmer Estelle (1856), Effie Clarissa (1859) [my great grandmother], Lewellyn (1862), Hannah Almira (1864), Marietta (1870), and Ora (1874).

On the occasion of Great Great Grandmother Lee’s 85th birthday, her children gave her a new black silk dress as a her gift and all posed in front of the Jenks’ Place [aka Deer Lick Farm]: 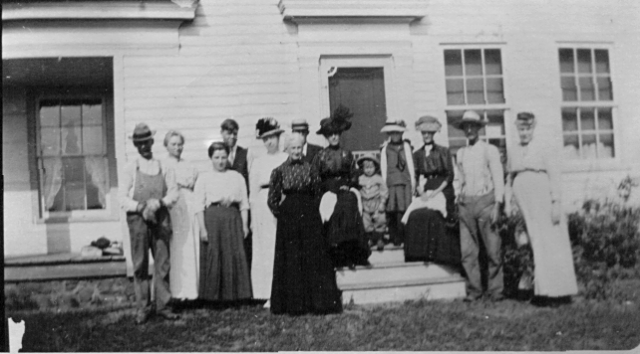 Esther Jenks Lee passed away on 10 February 1918 and was laid to rest next to her beloved Charlie in the Southfield Cemetery.

Genealogist / Family Historian; Blog started as a record of my Grandfather's post card collection which ran for 15 months. Then, in June, 2017, I changed over to reporting and commenting on notifications from the ANCESTRY app "We're Related" I then started to provide snippets into ancestor biographies on the dates that were significant anniversaries.
View all posts by Pat Shaul →
This entry was posted in Genealogy, Jenks, LEE, Uncategorized. Bookmark the permalink.