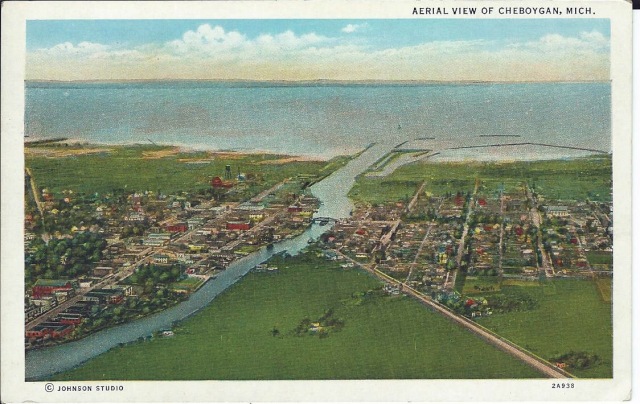 Another of Grandpa Lee’s unused post cards.  Again, from the 1919-1951 time frame due to the postage requirement of 1¢.  Grandpa Lee and Grandma Florence used to visit their friends’, Hazel and Reg Adams,  who had a cottage on Mullet Lake near Cheboygan.   Many times, the Adamses would loan out the cottage to the Weavers.   There was no running water — a pump out in the front yard and one at the kitchen sink.  The only requirement was the cottage be left as it was found — that meant the Out House was emptied.  Grandpa was in charge and never seemed to mind.  We always suspected this was his job as a boy.  We joined them at the cottage on a number of occasions.  Grandpa liked to go North near Labor Day to avoid the worst of Hay Fever in Detroit.    It is also of note that my father was born in Cheboygan.  It makes this a double interest post card.

Genealogist / Family Historian; Blog started as a record of my Grandfather's post card collection which ran for 15 months. Then, in June, 2017, I changed over to reporting and commenting on notifications from the ANCESTRY app "We're Related" I then started to provide snippets into ancestor biographies on the dates that were significant anniversaries.
View all posts by Pat Shaul →
This entry was posted in Genealogy, History, Postcards, Shaul, Weaver. Bookmark the permalink.