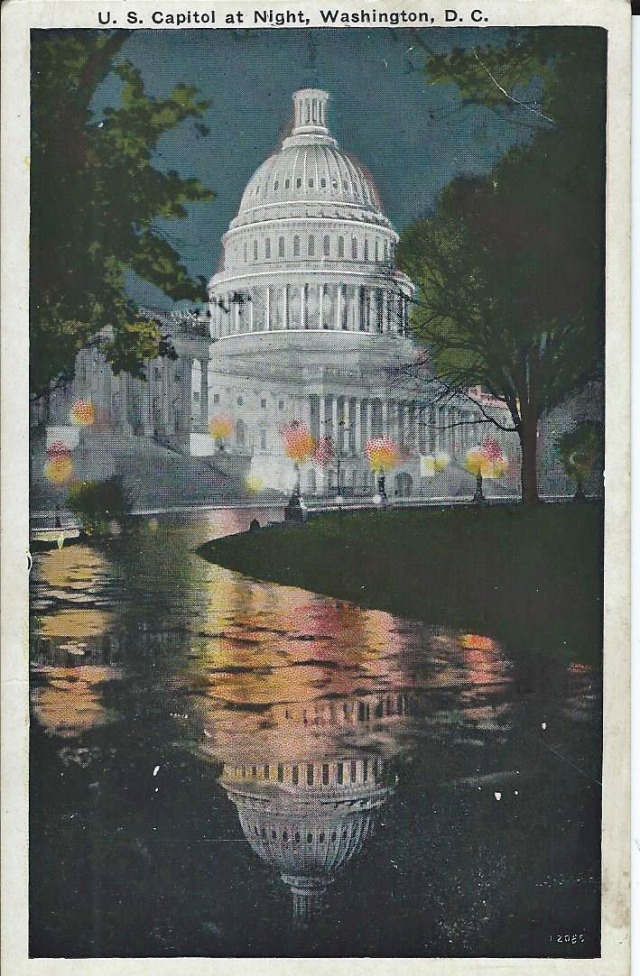 U. S. Capital at Night, Washington, D. C.  12089.  The United States Capital, set on a height overlooking the amphitheatre of the Potomac, is on of the largest and stateliest buildings in the world.  It is 751 feet in length and 350 feet in width, covering three and a half acres.  The statue of Freedom on the dome towers 307 feet above the esplanade.  The cornerstone was laid by President Washington in 1793; the central building was finished in 1797; and extensions were first occupied by Congress in 1857.    Published by B. S. Reynolds Co., Washington, D.C.

Although the post card was never sent, the message area was filled in by a very young Jmae (very youthful script writing and apparently, not fully sure how to spell her difficult name).  The 1 ¢ postage stamp was affixed.  This was probably written in the late 1920s or very early 1930s.

Genealogist / Family Historian; Blog started as a record of my Grandfather's post card collection which ran for 15 months. Then, in June, 2017, I changed over to reporting and commenting on notifications from the ANCESTRY app "We're Related" I then started to provide snippets into ancestor biographies on the dates that were significant anniversaries.
View all posts by Pat Shaul →
This entry was posted in History, Postcards. Bookmark the permalink.