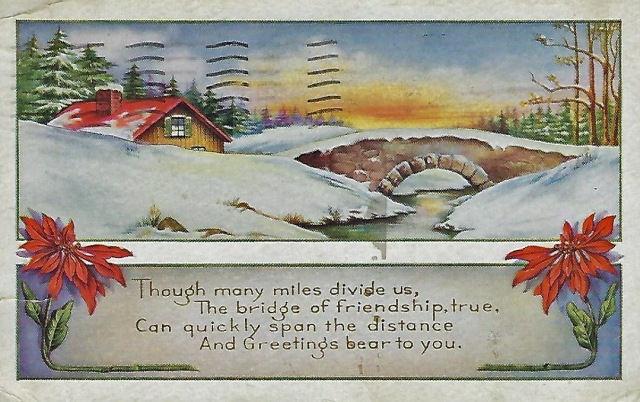 Though many miles divide us, the bridge of friendship , true, can quickly span the distance and greetings bear to you.

“Yours rec’d. Glad you are coming. Drop one a card so I can have the on cooking.  Hope you are well. We wish you many returns.  Hope to see you soon.  C.A. & C.W.S. [Christiana Weaver Rinehart Schwartz and Charles W Schwartz]”

Not sure what Aunt Teen wanted to have on cooking for Grandpa Lee.  Aunt Teen was Great Grandfather Lemuel Weaver’s sister.  Grandpa’s note must have been received after she wrote the address since the change in address (cross out of the Fort Terry and add in the Tireman Av) was in the same handwriting.  It is interesting that in 1918, the U.S. Post Office correctly delivered the card to 92 Tireman even though it was addressed to 91.  In 2016, a post card would probably end up in the dead letter file.

Also, this tells that Grandpa Lee was in the Quarter Master Corps at Fort Terry, New York during World War I — something he never talked about with his grandsons.

Genealogist / Family Historian; Blog started as a record of my Grandfather's post card collection which ran for 15 months. Then, in June, 2017, I changed over to reporting and commenting on notifications from the ANCESTRY app "We're Related" I then started to provide snippets into ancestor biographies on the dates that were significant anniversaries.
View all posts by Pat Shaul →
This entry was posted in Christmas, Genealogy, History, Postcards, Weaver. Bookmark the permalink.