Stephen King — miss then a hit! 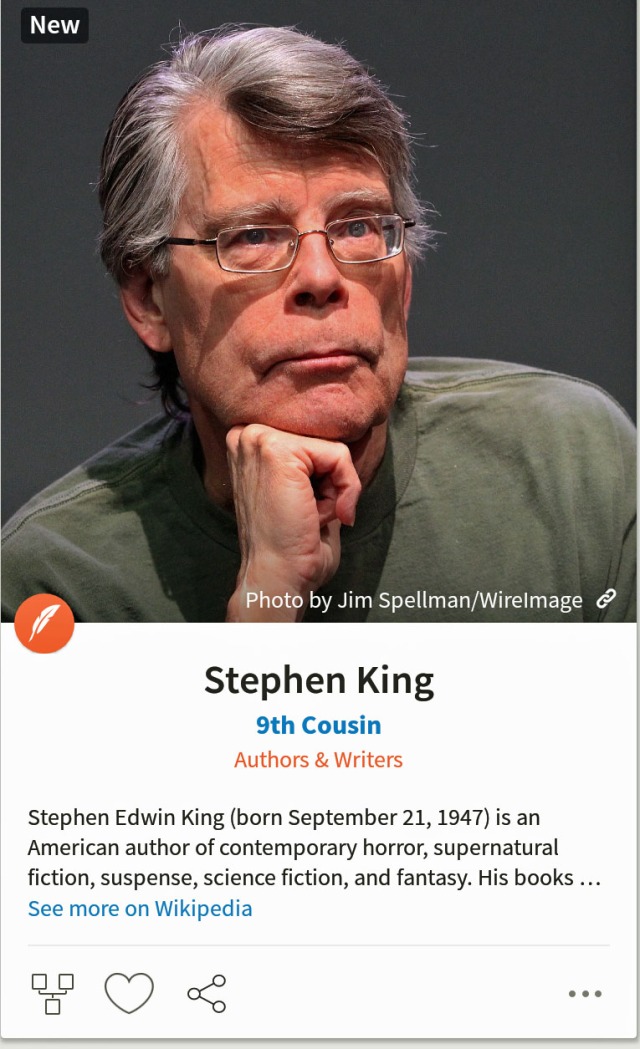 Stephen King showed up in We’re Related report # 373 as my  9th cousin through our MRCA Esther Ballard (1632-1717), my 8th great grandmother – fully documented!  In addition, the first two generations down from Grandmother Esther in Stephen’s lineage I also have the documentation to support!  So this may explain a bit of my quirkiness: it’s in the genes!  Now, earlier in report # 289, We’re Related reported Stephen and I were 8th cousins, twice removed, through our MRCA Mary Jane Wilkerson (1680-1758).  There were many PRIVATE entries in both of the lines in that report.  In the very beginning of Stephen’s line Mary Jane apparently gave birth to when she was 8 years old!  Both pedigree reports are from Stephen’s father, Donald Edwin Pollack King [King was his adoptive father’s surname], but this most recent one has a great deal more substance and I tend to believe may actually be correct if the rest of Stephen’s lineage can be documented.

Genealogist / Family Historian; Blog started as a record of my Grandfather's post card collection which ran for 15 months. Then, in June, 2017, I changed over to reporting and commenting on notifications from the ANCESTRY app "We're Related" I then started to provide snippets into ancestor biographies on the dates that were significant anniversaries.
View all posts by Pat Shaul →
This entry was posted in Ancestry, Genealogy, Pedigree Charts, We're Related. Bookmark the permalink.