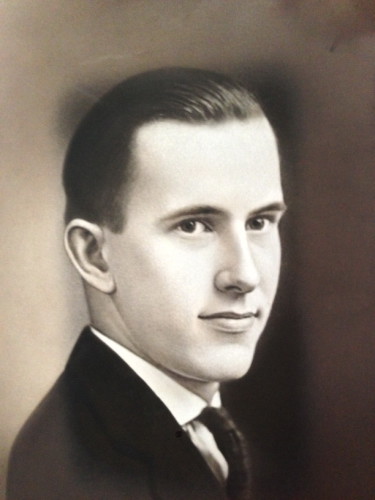 Uncle Heinie was Grandma Florence’s youngest brother.  He stayed in the family hometown of Columbus, Ohio after graduating in Pharmacy from OSU and eventually opened his own Drug Store.   Uncle Heinie married twice.  The first time to Helen Reed who bore three children.  The first boy did not survive.   The second, a daughter, was named Helen Claire. The third, another son, was named Richard Darwin.  Sadly, Helen Reed died in giving birth to Richard.   Uncle Heinie married soon after her death to Bettinna Henry.   The two children did not know until late adulthood that Aunt Betty was not their natural mother.   The entire Koontz family kept the secret from the children which caused later discord.

In a family reunion, Uncle Heinie’s nephew, Charles Gardner Griste, shared the following account of Uncle Heine’s activities to help the poor of Columbus during the Depression:

This is the story of the “Bean Man”. Let’s call him Heinie. When I first became well acquainted with him, I was nine or ten years old. He was a bout thirty. He was my uncle, and I like to flatter myself that I was his favorite nephew. He was a Pharmacist and worked in a small chain drugstore — he worked a lot of hours. The chain wasn’t too successful and the store where my uncle worked was one of the least successful of the chain.

It was located in the “bottoms”, an area that had twelve or thirteen feet of water in it during the great 1913 flood in Columbus, Ohio. It was a very poor neighborhood; many residents worked for the railroad or in shops or small factories. A few owned homes, but many were renters.

In 1928 – 29 the Depression started; soon the railroad started to cut employees’ hours. Men often worked only twenty-four, then twelve, then eight hours a week. Many factory workers were laid off completely as the little shops and plants became unable to sell and had to close their doors. By 1931, conditions were bad. People lined up to get free soup form the Salvation Army; the soup being made from whatever scraps the S. A. could dig up. The line up often stretched for two city blocks. Each person carrying their little container to get some food.

Heinie was — I suppose — you might call “chicken hearted”; he didn’t like seeing people that he knew be hungry. So, I guess, he decided to do his own bit to help. He bought Campbell’s Pork and Beans — about ninety-six cans a week, at one time, and passed them out to anyone that said “I ‘m hungry — I’ve got a family, they are hungry.” They were given one or two cans of beans and when they said “I can’t pay,” Heinie said that if they ever could, to return the cans to him.

Conditions were slow to improve, unemployment went up to about fifty percent in the “bottoms” and the workers were almost all just working part time. Roosevelt, with his aid programs, was almost like a god to these people and ninety-six percent of the votes in the area went to the Democrats.

Since the small drug store chain was in trouble, Heinie finally opened his own store — underfinanced, I’m sure. But, he continued his bean program. And things were improving; quite often someone would bring in two or six or twelve cans and “replace the ones you [Heinie] gave me” and he didn’t even have to buy many beans.

The Republicans were in dire straits. All of their candidates were soundly defeated and they searched for candidates that might possibly win — win anything: City Council seats, County seats, state seats, anything. And, eventually, someone hit on the idea of asking Heinie who was a Republican to run for City Council in Columbus, Ohio. He agreed; he spent no money on his campaign (he didn’t have any to spare) and when election day had passed he was elected. Not by a piddling few votes, he got ninety-six percent of the votes in an area where other Republican office seekers got five or ten percent. Later, he ran for other offices; eventually, sold his Pharmacy and was a “full time politician.” His kindness and his honesty kept him in office until he died. And many residents in the “bottoms” were quite angry if you stated you were not going to vote for the “Bean Man.”

He never talked about what he did. In fact, I think it somewhat embarrassed him. His daughter and son, I’m sure, don’t know about the “Bean Man ,” but they will find out — now.

Maybe, there was one good politician ……

Genealogist / Family Historian; Blog started as a record of my Grandfather's post card collection which ran for 15 months. Then, in June, 2017, I changed over to reporting and commenting on notifications from the ANCESTRY app "We're Related" I then started to provide snippets into ancestor biographies on the dates that were significant anniversaries.
View all posts by Pat Shaul →
This entry was posted in Columbus, Ohio, Genealogy, History, Koontz. Bookmark the permalink.