In 1847, for $4,000 he purchased the coach house on Shiawassee which he renamed the Botsford Inn.

From the National Register of Historic Places Application:

“The primary significance of the Botsford Inn is its importance as the oldest still functioning inn in Michigan. Although it was originally built in 1836 as his
residence by Orrin Weston, a farmer, in 1841 Stephen Jennings acquired the house
and converted it into a tavern. Because of its distance from Detroit City Hall
it became known as the Sixteen Mile House and served as a stagecoach stop an the
Grand River Plank Road from Detroit to Lansing and Grand Rapids. It is likely that
Jennings made several additions to the building at this time including the rear ell,
the right-hand two bays of the main house and probably the porch across the front.
In 1860 [actually 1847], Milton C. Botsford purchased the inn which was subsequently known as the Botsford Tavern. During the sixty-four years of the Botsford proprietorship the tavern was a popular meeting place for farmers, drovers, local residents and travelers.

“The heyday of the inn coincided with the era of stagecoach travel from 1840 to 1870
when it afforded a necessary stopping place for travelers to rest and eat,and coachmen
to look after their teams.
By the 1920’s, the inn had outlived its usefulness and was in danger of being
demolished to make way for the widening of Grand River Avenue as U.S. Route 16.
Henry Ford, founder of the Ford Motor Company, acquired the delapidated structure
in 1924 from the Botsford family and moved it back from its original site out of
the path of the road widening. He was motivated by his nostalgic attachment to
the old tavern where he had courted his future wife, Clara Bryant, decades earlier.
Ford had his architects rehabilitate the old structure making various alterations
including enlarging the ell, building a replica of a nineteenth century wagon shed,
and installing some period woodwork and antique furniture.

“At this time Ford was just becoming actively involved in preservation. He had
restored the Ford family homestead a few years earlier and was contemplating the
establishment of the Edison Institute and Greenfield Village in Dearborn to house
the large collection of Americana he had been assembling since 1906. This vast
undertaking was still five years in the future, though, in 1924 when Ford’s
restoration projects were still undertaken primarily for sentimental reasons.
The Ford family continued to operate the Botsford Inn as a restaurant until 1951
when it was acquired by John Anhut. Its growing popularity led to the construction
of several new wings of hotel rooms after 1960, although Anhut preserved the
interior of the old inn much as the Fords left it.

“Today the Botsford Inn continues to serve the public as the oldest establishment
in Michigan still providing food and lodging. It is significant both as an
example of Michigan’s domestic architecture of the 1830’s and for its historic
importance as a link to the stagecoach era of the mid-nineteenth century. ”

[The additions have since been demolished, leaving only the original building in place as a meeting space for the hospital which was built on the Inn’s grounds]

The Botsford Inn was admitted to the National Registry which is what caused the original portion of the building to be preserved. 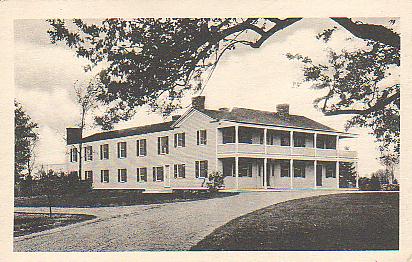 I have been referring to my cousin as Clarence as it seems that is the name he was known by during his life.   As is evident in the naming of the town near the Inn, Clarenceville (now fully incorporated into Farmington).

Genealogist / Family Historian; Blog started as a record of my Grandfather's post card collection which ran for 15 months. Then, in June, 2017, I changed over to reporting and commenting on notifications from the ANCESTRY app "We're Related" I then started to provide snippets into ancestor biographies on the dates that were significant anniversaries.
View all posts by Pat Shaul →
This entry was posted in Botsford, Genealogy. Bookmark the permalink.