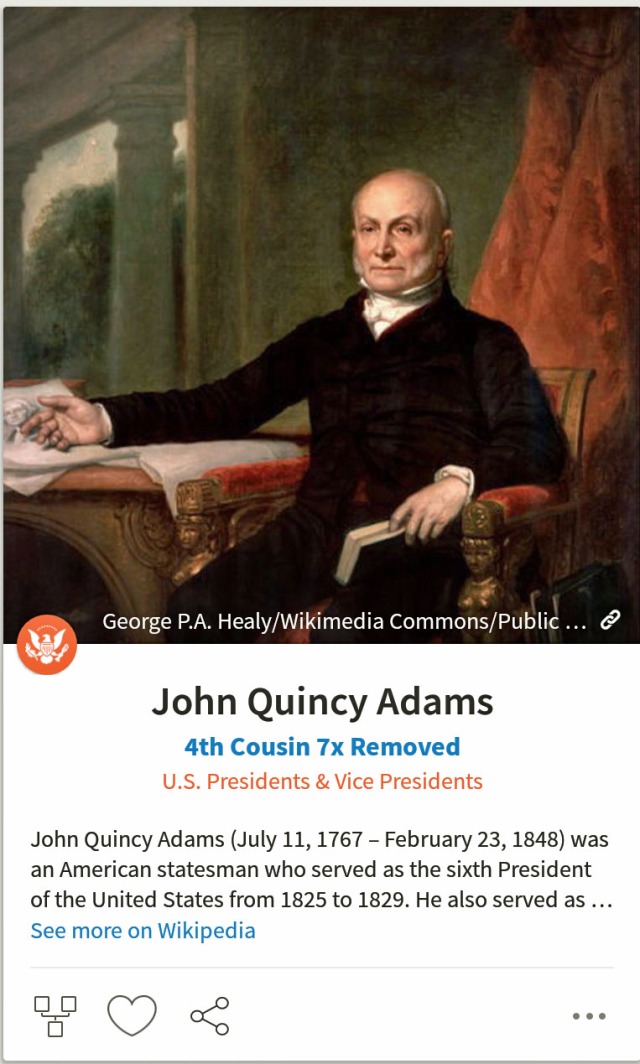 I received the notice that John Quincy Adams was my 4th cousin, seven times removed and I thought, “Well about time!”.   JQA was the 292nd notification from We’re Related.  His father, Pres. John Adams, was the 3rd notification.  I then looked at the pedigree chart presented for the son versus that of the father and they are of different lines of descent.  John Adams goes up my Botsford line to MRCA, Henry Adams (1583-1646).  John Quincy Adams also goes up my Botsford line, but to MRCA, Samuel Bass (1600-1694).  And, even though he appear as PRIVATE MALE in the role of JQA’s father,  John Adams is also a descendant of Samuel Bass.  This makes them doubles.   That is, if I can actually find the backup evidence.

Genealogist / Family Historian; Blog started as a record of my Grandfather's post card collection which ran for 15 months. Then, in June, 2017, I changed over to reporting and commenting on notifications from the ANCESTRY app "We're Related" I then started to provide snippets into ancestor biographies on the dates that were significant anniversaries.
View all posts by Pat Shaul →
This entry was posted in Ancestry, Genealogy, History, Pedigree Charts, We're Related. Bookmark the permalink.