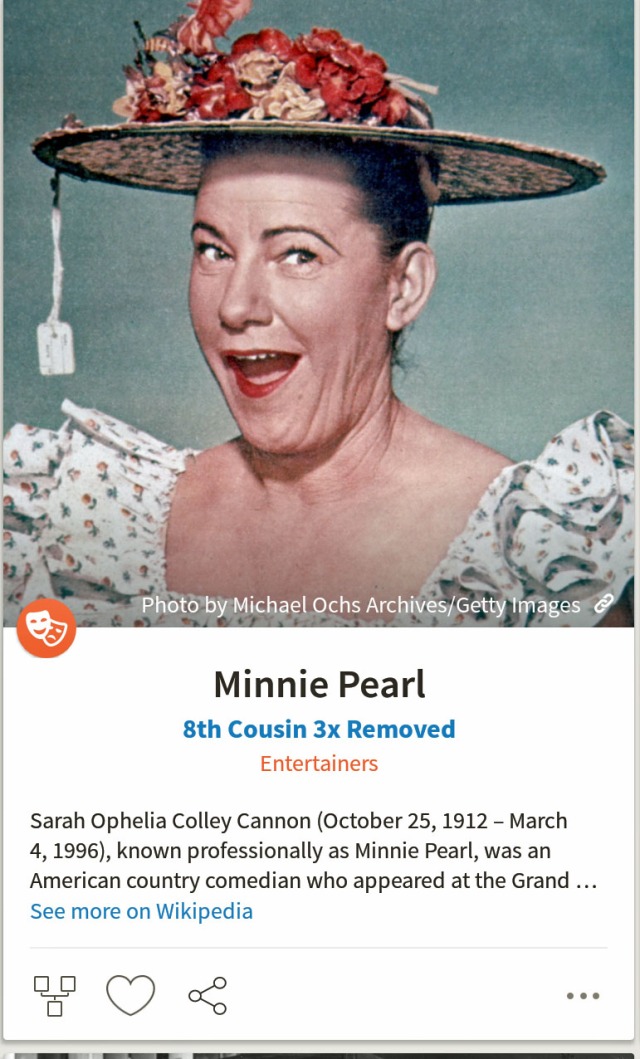 Minnie Pearl as my 8th cousin, 3 times removed, through MRCA, William Isham (1577-1627), the 3 times great grandfather of my 5 times great grandmother, Thankful Isham (1752-1834) is the most lineage I have seen proposed for the Isham family!  This was in notification # 355.  There was only one glitch in lineage proposed for Cousin Minnie (love her real name – Sarah Ophelia) in that the next generation down from the MRCA, Henry Isham (1628-1670) was born the year after his father died.  This is not impossible — it is definitely better than the lineages proposed by We’re Related where the child is born after the mother has died!  But, this is also the second notice on Minnie being a relative. She also was in notification # 233 where we meet at MRCA,  Elizabeth Cooke (1611-1663), the proposed mother of my furthest documented ancestor in that line, my 7th great grandfather, Isaac Lawrence (1652-1731).  In this report, Minnie and I are straight out 9th cousins.  The two reports cross in Minnie’s lineage at her parents:  #355 has her father, Thomas Kelly Colley (1857-1937); #233 has her mother, Frances Tate House (1875-1963).  Another tangled web of cousins being their own cousin thanks to connections they never knew they had – me!

Genealogist / Family Historian; Blog started as a record of my Grandfather's post card collection which ran for 15 months. Then, in June, 2017, I changed over to reporting and commenting on notifications from the ANCESTRY app "We're Related" I then started to provide snippets into ancestor biographies on the dates that were significant anniversaries.
View all posts by Pat Shaul →
This entry was posted in Ancestry, Genealogy, History, Pedigree Charts, We're Related. Bookmark the permalink.