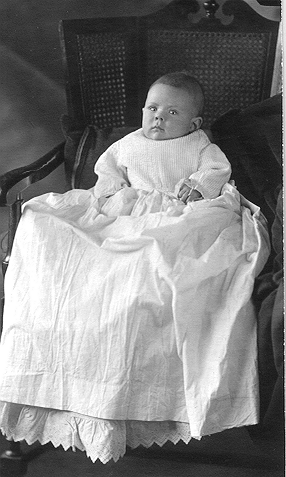 It was 100 years ago, on 22 October 1919, that my Aunt, Leila Marie Weaver, was born on Tireman Avenue, Detroit, Wayne County, Michigan, to Lee Goodliff and Florence Marie Koontz Weaver.   She was born in the upper unit of her grandparents Weaver’s duplex where her parents were living.  Aunt Leila’s name was derived from her father’s first name which also happened to be his mother’s family name.

Leila was four years older than my mother and the two were typical siblings.   Stories of a fish slapped across a younger sister’s face and of a cherry pie being heaved across the dining room at the same face surfaced at various times.   The former caused a lifelong aversion to fish, the later did not seem to have the same impact with cherry pie.  In fact, as that story goes, after my mother ducked and it hit the floor, they scraped it up and quite enjoyed it.

Aunt Leila married my Uncle Andy in 1944 and the two had two children.  Aunt Leila passed away in 1977.

Genealogist / Family Historian; Blog started as a record of my Grandfather's post card collection which ran for 15 months. Then, in June, 2017, I changed over to reporting and commenting on notifications from the ANCESTRY app "We're Related" I then started to provide snippets into ancestor biographies on the dates that were significant anniversaries.
View all posts by Pat Shaul →
This entry was posted in Genealogy, Weaver. Bookmark the permalink.